The derailment of a freight train on the track ahead, causing a delay of some four hours, shook my precarious confidence and threatened to overwhelm me with despair. I felt that the incident was foreordained–Fate's judgment on a fool's errand. Nevertheless, Fate or no, I shall write a curt note to the railroad's directors–some of whom are my acquaintances–to let them know of the enormous inconvenience to which I was subjected.

We arrived at last at four o'clock–too late to accomplish anything. I was faced then with a decision: return at once to Boston, or find–if I could–a decent hotel and begin my assault in the morning. If I returned, I feared that I might never come back. Quite aside from the mishap, the journey had been disagreeable in the extreme. Further, I feared that I might never again get up my courage to confront her. Go away, I thought, and I will never see this place again. I will never have them.

Stay, on the other hand–stay and seek her out–I weakened. I surrendered myself once again to that obsession which had held me tight in its grip since the moment I had heard of the existence of those fragments of the poet's heart. I rose from my seat, brushed the soot from my coat, and stepped out into the bitter cold, the dripping mist of the waning afternoon.

Surely the world never saw such a one as him. Not that the world cared. The world ignored him, the world left him and his loved ones to starve, the world–to its everlasting shame–refused to see that for a few brief years it had in its midst a bright star–a comet flaring across the dark sky of our ignorance–and so left him to die, tragically, alone, reviled, unmourned save by a devoted few.

To have seen him! To have known him, spoken to him, held his hand in friendship–to have been bathed in the fire of those brilliant eyes reflecting the phantasies, the dancing arabesques, the dark seething vision of his special netherworld of the spirit!

He had been dead ten years when I was born. I remember still the day I discovered him. It was a dreary autumn afternoon, a Saturday, and so normally a day for me to run the Common with my friends; but I had been ill with a stubborn wheezing cough, and my mother decided that I must stay at home. I wandered through the house, looking for something to amuse me–I was an only child–and eventually I found myself in my father's library, a large dim room at the rear of the house.

I browsed the shelves. I saw a small volume wedged between two larger ones. I pulled it out. The brown cover was worn, the lettering faded. Some instinct moved me to open it to the title page: Tales of the Grotesque and Arabesque. I had never seen such a title. It thrilled me. I sounded the syllables over and over in my mind. Helpless to remove my eyes from the table of contents, I stumbled to a plush chair by the window and began to read.

Mrs. Loring, my informant, had told me enough to arouse my imagination but not nearly enough to satisfy my curiosity. They existed, she said. That was all she knew. And–imagine it!–their recipient existed also. Mrs. Loring had had it on the best authority. What this was she did not say, and I did not inquire, attempting as I was to keep our conversation casual–and yet not so casual that I missed some vital point. I was sure that she had never read the collection of his letters published some years ago. And if that published correspondence was so deeply moving, so agonizing, so revealing of the heart of the man, what must the unpublished by? For there were unpublished items, of that Mrs. Loring was positive. Unpublished–perhaps unpublishable.

I had listened to her that evening with mounting excitement, although I had been careful not to show it. She never knew that I had more than passing interest in her gossip. She does not know, now, that I have embarked upon my search. I look forward to surprising her with an account of my adventure the next time I see her. Perhaps I will even show her a page or two.

Unpublished! A vast treasure–waiting for me! I imagined them: a thick packet, carefully wrapped and tied, brittle, discolored, the edges charred, perhaps (so high did my fancy soar), by the flames of his passion. How I longed to see them–hold them–possess them!

I switched off the electric lamp and climbed into bed. My new nightshirt scratched around my neck. I closed my eyes. His face floated up. I felt very close to him now, here, in this hotel, in this dreary city. He had been here, had seen this hotel perhaps; had passed along these thoroughfares.

Certainly he had found some happiness here, at the end of his brief, tortured existence. He had found one face which came, in the little time left to him, to mean more than any other. He had found peace; sanctuary; a tranquil time before the final storm. He had found a love: Annie Richmond. I hope–I prayed–to find her, too. Tomorrow.

A shudder–a wracking thrill–convulsed my body. I turned over and went to sleep. 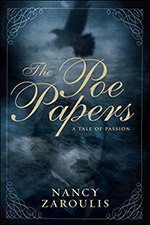